I have just had a nice time going through my photos from 2014. There are some good memories stored in those photos and some lovely scenery. I am a lucky son of gun who is way too privileged. I’m not sure why I’ve lucked out to get to see and do all the things I get to do, but since it’s being offered up, I may as well take it before someone else does. So. 2014. Pretty good vintage I would say as far as experiences go. I kind of forgot how much traveling I did at the beginning of the year as I barely left London after June. Feels at the moment like I haven’t traveled in years. 6 months may as well be a couple of years in my nomadic life. I had a great time in London town as well. Making new friends and getting ever closer to “old” friends. Long may it continue into 2015.

Best trip: Porto, Portugal My trip to Porto was break before going on break to Ireland. I needed a few days to gather myself with so much going on with work and school and being told to leave my house a week earlier. I have heard so many good things about Portugal in the last couple years, I thought I’d try it out. I went to Porto over Lisbon because I wanted to see where Port was from and how it was made. I so wasn’t disappointed with my few days in Porto. I met some lovely like minded people who had randomly chosen Porto for a holiday as well. I went to a couple places producing Port and very much enjoyed all the tastings I went to, but for some reason chose not to bring any back. Dumb. I think I will have to go back to correct my error. Even if you’re not in to Port, the city is absolutely stunning. Beautiful architecture, a picturesque river running through the middle and lots of good food to eat. I recommend it highly.

The streets of Porto

Best trip Honorable mention: Kintra Farm, Islay, Scotland I believe I’ve already said quite a bit about this place. It is a bit of camping magic with hot showers to boot. I really forgot all about work and life while on the bluffs above the 7-mile beach for the 4 days I stayed there. Weather was great and the whisky and fire weren’t bad either. And hardly a soul around except for the nice couple from Glasgow with the dogs who kept weeing on my tent who were staying next to me. Now if someone would just come with me next time and help me haul back firewood from the the beach I would be much appreciative.

I want to do this again sometime. Anyone care to join?

Best book I read: Team of Rivals by Doris Kearns Goodwin I read most of this while in Scotland and the rest over the summer. It is the most readable history book I’ve ever read. If you are interested at all in the American Civil War, learning what a badass Abraham Lincoln was or how to lead a nation, read this.

Best book Honorable mention: A Moveable Feast by Earnest Hemingway I’ve got a soft spot for Mr. Hemingway. Maybe because he was an expatriate like myself. But this book, autobiographical about his time in Paris, is lovely. I really gleaned a lot from what he told about his writing process (not that you can tell that on this blog). It was nice to read it while in Paris as well.

Best song: Hozier – From Eden Well, this Irish dude is a pretty incredible singer. It seems like the rest of the world has realized how good he is now. I’ve been following him for the last year via BBC Radio 1. This song played several times on the radio while we were driving around Ireland and it made me ever so pleased.

Best song honorable mention: Dan Croll – In/Out Me and Bobbles had the best time dancing to this tune at the Dan Croll gig down in Brighton in March. In fact we danced like fools to all the songs with no one apparently noticing, which pushed the dance moves further than they would have ever gone. And now, anytime this song comes on, I’m forced to dance like a lunatic.

Best new food: Kothu After searching out the best curry in Tooting, I found some positive reviews for Apollo Banana Leaf, a Sri Lankan restaurant on the high road. Bobbles and I went here for a meal and got the traditional Sri Lankan Kothu. It was life changing good for both of us. And we have introduced it to some other people who have agreed with our review. I crave it all the time. Luckily it’s only a 10 minute bike ride away and sometimes the Kothu food van shows up at KERB in KX, which is an extra special lunch time treat. Puff and I get 3 veggie portions and split them.

Best new food honorable mention: Oysters I had my first ever oyster at Fyne Fest this year. Surprisingly tasty and not what I was imagining at all. I have gone veggie since August, but I will likely lift the moratorium on meat when I go back to Fyne Fest if only to get salmon kedgeree and shoot a couple of oysters again. Yum.

Proudest moment: Doing my first pull up Must have been back in March when I finally accomplished this. I was training for our big 20 mile assault course race and thought pull ups were going to be important for all the walls we had to get over. And I’m talking the real deal: thumbs in, chin over the bar pull up. I started out in January unable to lift myself up at all. I wasn’t sure I’d reach the point when I could do it. Seven weeks later when I finally got to the point where I could do one I was over the moon. It felt like a really big accomplishment. Much bigger than getting a master’s degree that’s for sure. Now I try to do a couple of pull ups everyday (both thumbs in and thumbs out) just to keep it up. My next step is to do it from full extension. I have been trying but my stupid right shoulder, which I’ve enjoyed injuring many times over the years, seems unwilling to rotate properly to lift me up and shoots me some lovely pain when I try. Maybe by the end of 2015 I will be able to do it.

Proudest moment honorable mention: Getting on the exec board for trees I felt a bit forced into doing it and completely unqualified, but for some reason they decided I was alright enough to join the cool kids club for tree officers here. It has been really interesting and a great challenge for me professionally since June. I have a lot of catching up still to do with the other members, but I think I’m doing ok. Unless I really mess up, they are stuck with me until June 2016. 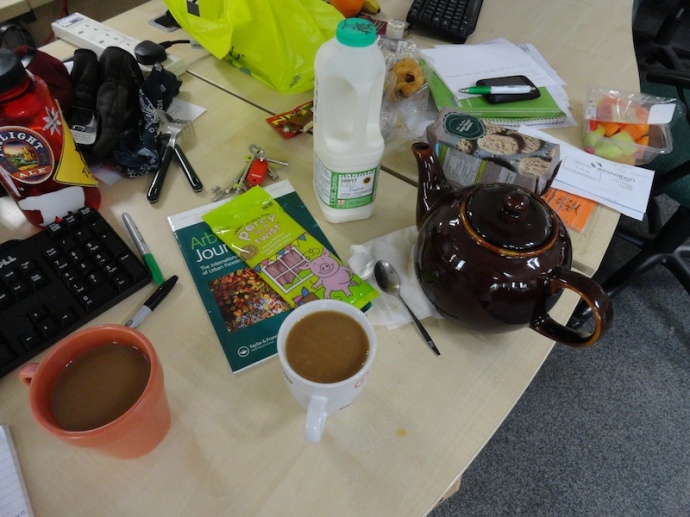 Perhaps the board heard about my stellar ability to make a pot of tea for my team.

Well, I would like to think there are some other best of categories I would like to explore, but I think I’m tapped out. Time to finish packing and head to the pub for some cask ale before 3 weeks of bottled beer in Africa. At least that’s what I’m anticipating. I leave you with some nice photos from this year. Happy new year all.

Hampstead Heath. Giving me moments of much needed sanity throughout 2014.

The Poppies at Tower of London. Really touching and beautiful.

The most serious Cap’n America ever: my buddy Puff

Pretty cat who loves looking her best whilst keeping warm.

A perfect sunrise in Tooting Common. I get to spend a lot of time here now and I love it. 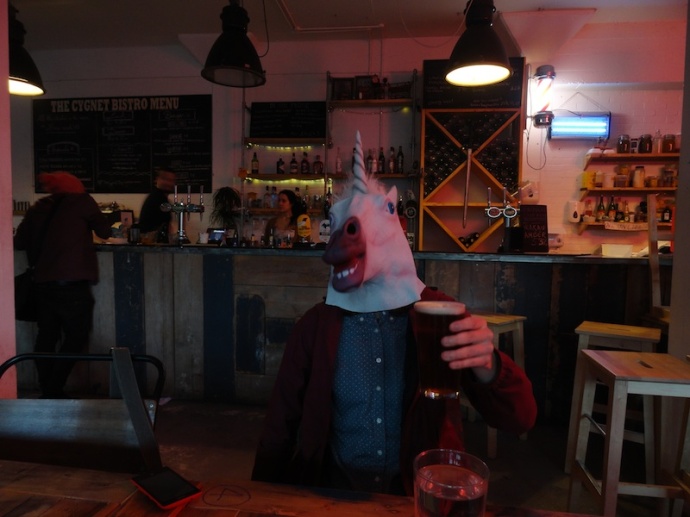