A funny story: not really

You’ve probably been wondering where I’ve been this Summer. I dropped off the FB first. Then I dropped off wordpress. A sad state of affairs for you, my loyal readers.

It’s mostly because I’ve been doing a lot of this:

And then inevitably the next day doing a lot of this:

Ok, maybe not that much of that. But truly a lot of watching this:

Wow, it’s been raining a lot. And I mean a lot.

Neglecting my writing was not supposed to happen due to hangovers, rain or even honey badgers. Because none of those things have stopped me in the past. It has been the inadvertent victim during a time of transition to a new routine for me. Now that the dust is beginning to settle, I can set a time for blogging. In fact it’s going to be part of a whole new after work routine which will see me running, tennising, and enjoying life more. As much as a strictly regimented life can be.  So yes, let’s keep the faith that things will turn around here.

I’m happy to report after that last sad blog update (hello Debbie Downer!) that things have gotten better for me and said person. I won’t cut my losses just yet. I will stay the present course with my heart and head.  Huzzah. It’s part of a new 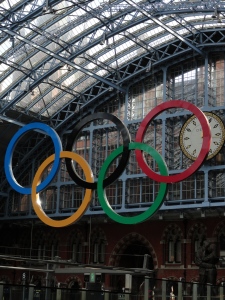 routine (which may have started when I quit FB) that I will focus more on the current rather than worrying myself too much about the past or the future. Cause right now I’m living in London. A city that’s absolutely buzzing thanks to the Olympics about to commence. I worked hard for the last 7 years to get to this moment. And dammit, I’m going to live it up as much as possible! That’s why I’m taking a week off of work during the Olympics so I can enjoy it to the max.

There’s a lot happening in the city involving the Olympic build up. At least that’s what I hear and read. I wouldn’t know. I have stayed primarily south of the River for the last couple months. But this weekend (barring any torrential rain, which seems always likely this year) I will get on my bike and see what’s happening. I’ve seen some viewing screens in Woolwich and some of the buildings lit up with the Olympic rings at night from afar. From a train.  But besides that, I’ve been neglectful. And when I go to the events, I will promise to have some nice blog posts about my experiences.

Ok, I hope this appeases my readers at least for the moment.  Thanks for staying faithful. Take care and keep the faith. -CO