With a few minutes left of being in my 20s, I thought I’d reflect back on that tricky decade of life. First though I need a beer.  BRB.  Ahhhh. That’s better.

My dear left handed chum Oprah Winfrey was not shy in doling out advice on her show. I started watching Oprah in 2002 when I was 20. I remember her repeatedly mentioning that 20 somethings get too caught up in life and having a plan and knowing what they will be doing in the future.  She said 20s are best spent figuring out who you are and then going from there. I did my best to keep that in mind in those moments when I got frustrated at relationships, jobs, and moving around. For me I have been best at figuring out myself when I’ve been out of my comfort zone as I imagine it is for most people. That’s best been accomplished when I have been traveling or living abroad. I got away from my safety net and sought to experience something new and completely different and meet new people. As I was reminded once again the other night, you never know who you’re going to meet and what impact they are going to have on your life. The tough part is building up the courage to show up for those experiences. But once I did it, I was addicted. I couldn’t wait for the next time to strike out and see someplace new and who I’d meet. Those experiences have forced me to peel back my onion layers more than anything else. So thank you to Oprah for the advice. It was spot on. Hopefully those of you who are still in your 20s or not yet in your 20s can put it to use.

Every year on my birthday I try to write in my journal. I went back to my journal from 10 years ago to see if

A trip to the pumpkin patch October 2003 with John, Bri and Katie

wrote anything ground breaking on my 20th birthday. Not. So. Much. I did write quite a lot about boys and friends and DRAMA, which was happening at the time.  Most of what I had written I can’t remember what it’s in reference to. Or maybe I just pushed it out from my brain. Knowing what I was truly going through at that time, I was obviously avoiding writing about it and keeping my entry topical.  So unfortunately, I can’t tell you that I did all the things I wanted to do as a 20 something. I wasn’t that forward thinking that day. What I do know is that I got the big things done that I wanted to get done this decade: finish college, go to all 50 states, move to London. Oh and not get fat. Boom!  Good job, me.

On the eve of hitting the big 3-0, I am feeling good about who I am. I look back and see my writing from 10 years ago and I still see me all over the pages. But these days, I’m just a bit more comfortable in my skin. A bit more confident in my actions. I know I’m not going to quite fit into “normal.” I’m  always going to be a bit eccentric, unable to ever sit still too long, curious about the way things are structured in life, thoughtful, and will end up having my hands in the dirt doing work with plants for the rest of my life.  All that sounds A-OK with me. The only bit of me, which I still have a 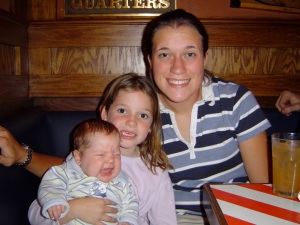 Me, Katie and Jonathan enjoying Uno’s Pizza in October 2003

lot of work to do is being in a relationship with a boy.  My growth in that category was stunted for a long, long time and I have long distance to catch up. Guess that’s what the 30s are made for, right?

For the next decade, I have a couple goals, but not much as of yet. I’ve spent so much time in the last couple years focused on getting through NOW, I haven’t a chance to make long term plans. So I’d like to own and run an apple orchard/hops farm/food farm/cattery in the next 7-10 years. I want to get serious about love and marry some dude. Hopefully he’ll want to be involved in farming as well. I want to see the rest of the tennis grand slams. I want to travel to 2 more continents. I want to get a decent paying job for a change (in the works)!

I think that’s about it.  Up until this point, you may have noticed some old pictures mixed in. I’m going to leave this post with a whole load of photos. I have chosen 31 pictures (as it’s going to be my 31st year) from the last 10 years, which mean a lot to me. I wish I had older pictures, but unfortch they didn’t make it over the pond, so you’re stuck with Summer of 2003 and on. Thanks to all of you who helped make my 20 somethings so insanely good. I love you all oh so much. Looking forward to the dirty thirties! 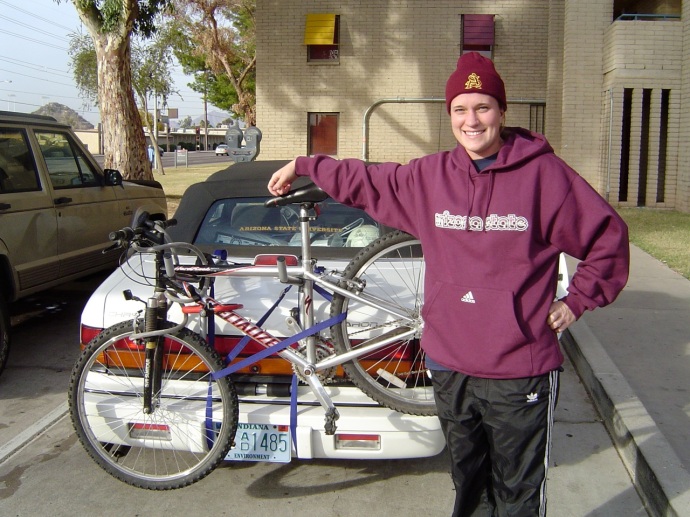 Just another road trip amongst many in October 2004

Dancing and singing at Kelly’s wedding May 2006

Back to London with fellow London traveler, Matt December 2006 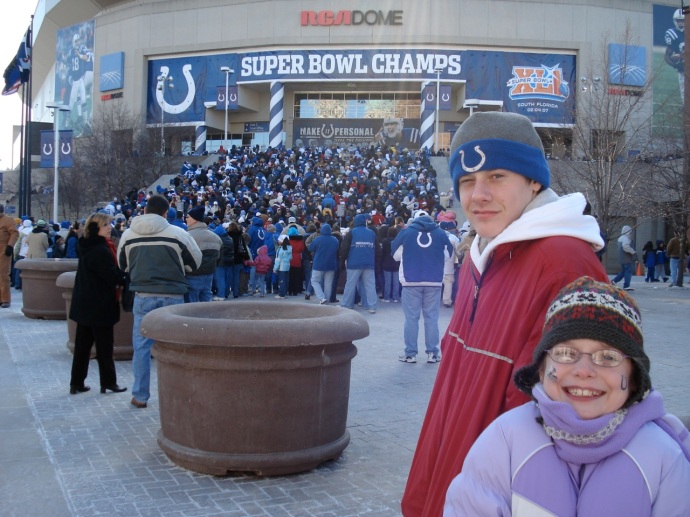 Colts win the Superbowl and Jake, Katie and me go to the celebration in Indianapolis in February 2007 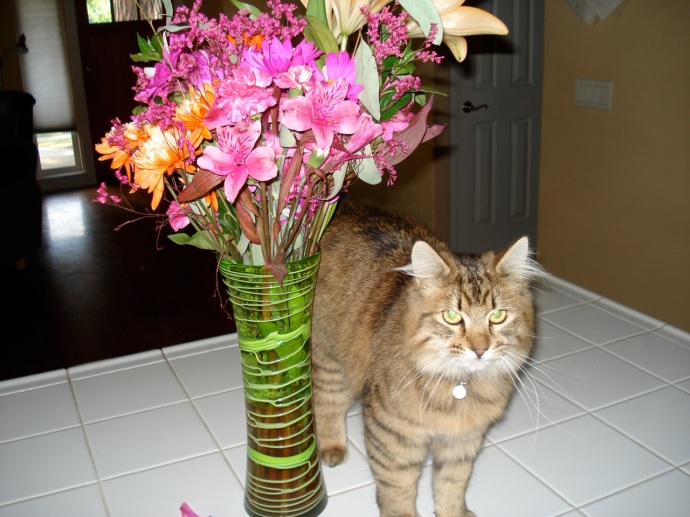 I got this cat, Piccadilly, for my 25th birthday from Tera in June 2007

My first (and so far only) backpacking trip with Tera and Katie in Hawaii in January 2008. My 50th state!

Me and my little baby neice Helen in February 2008

I stood in line on my 26th birthday to get tickets to see Barack Obama speak the next day in Bend in May 2008. 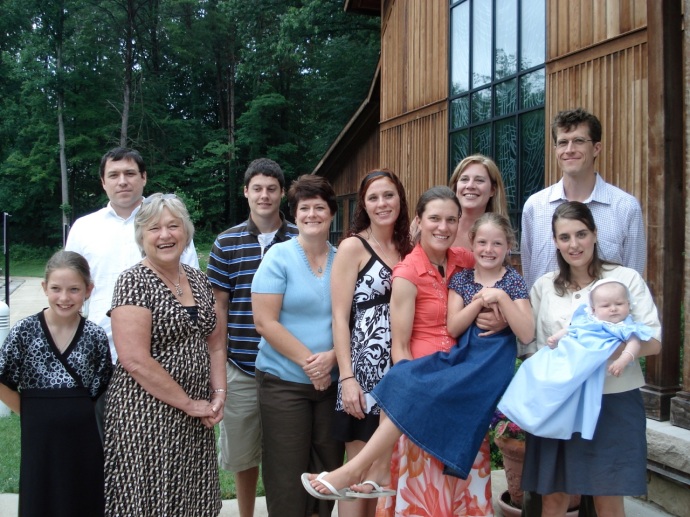 I randomly showed up for Helen’s Christening in Indiana in July 2008. God mother! 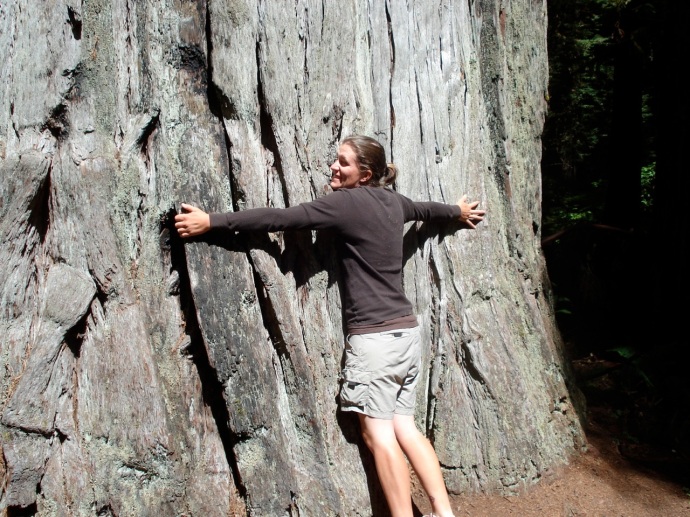 Redwoods. An influential organism in my life in August 2008.

I started seeing this guy Eric and I think this picture sums up what’s happened since. August 2008 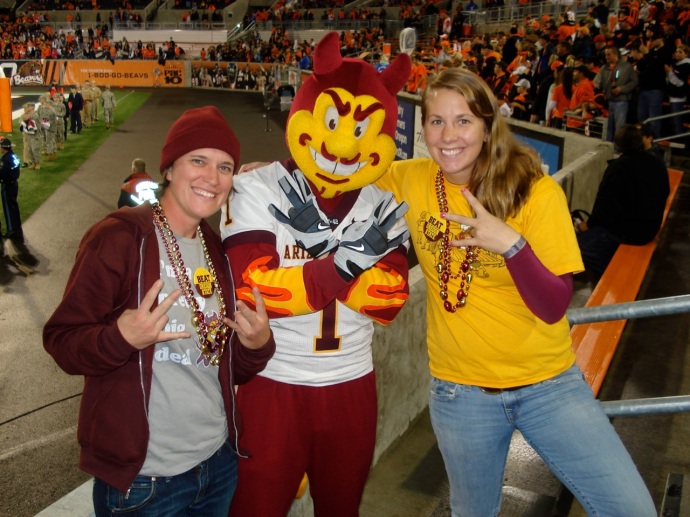 My quest to see ASU win a football game in person post graduation continues…this is in Corvallis, OR in November 2008

Lots and lots of jumping in the last few years. This time with Nikki visiting in March 2009. 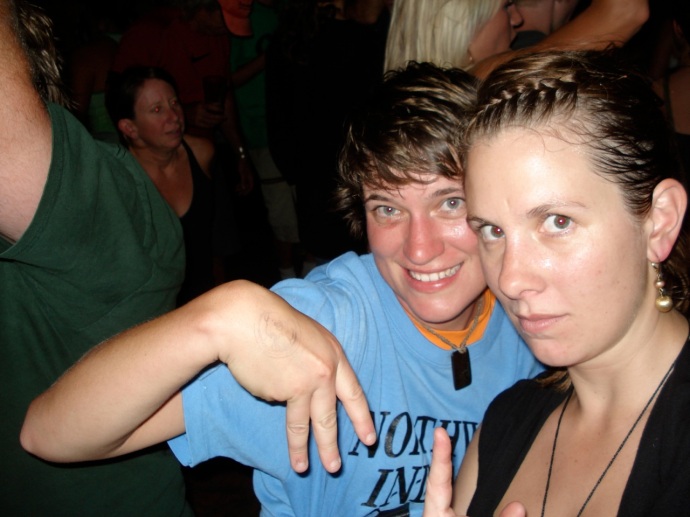 The greatest night of dance in my life. RIP MJ. July 2009 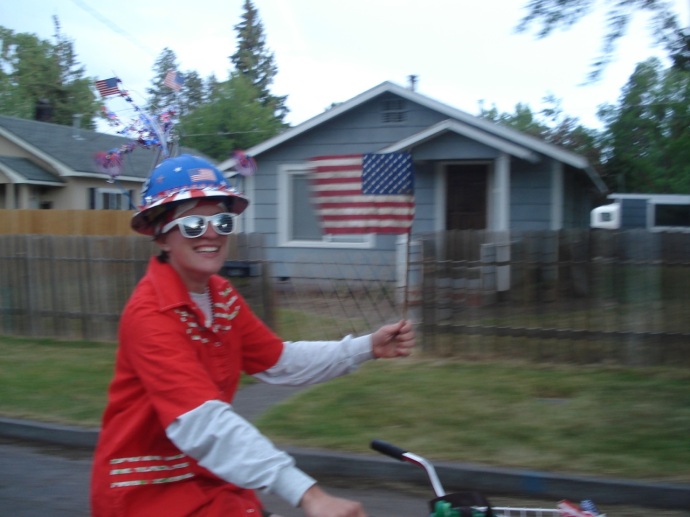 Dressing up, cycling and beer. My favorite things brought together. July 2010. 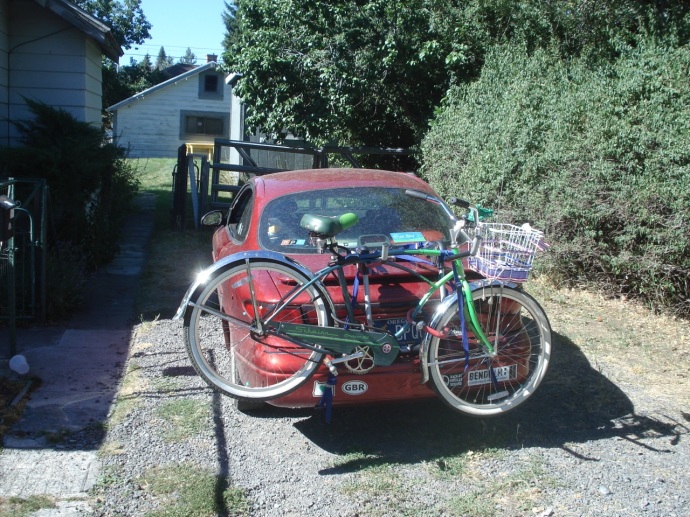 Packed up and leaving Oregon after 5 wonderful years in August 2010.

Lots of trips to NYC to see brothers and fam. Quinn and I in September 2010. 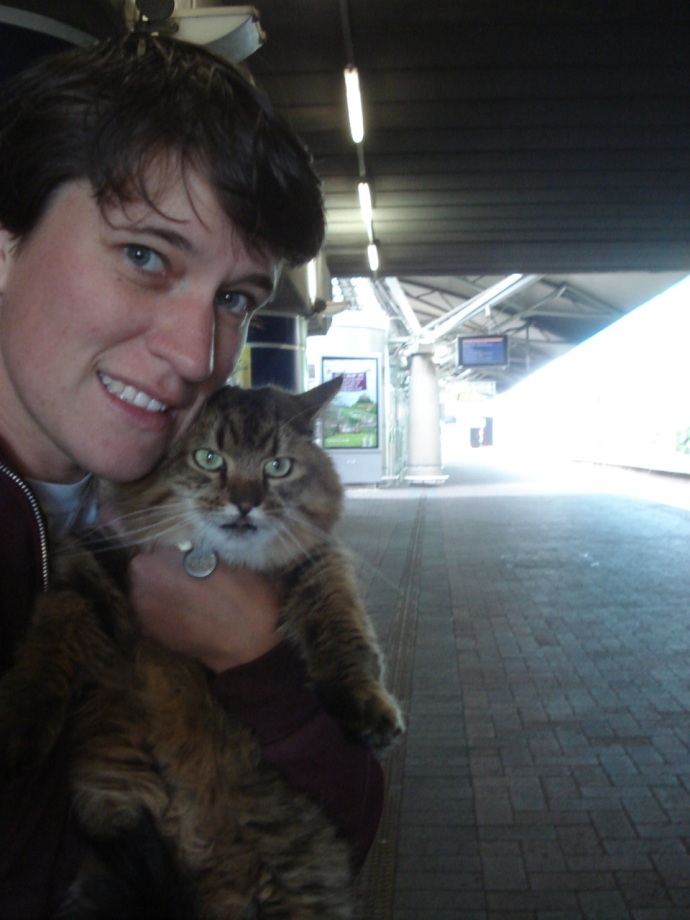 The weary travellers made it to Lancashire, UK in September 2010.

Visited a new country and continent: Kenya in February 2011. 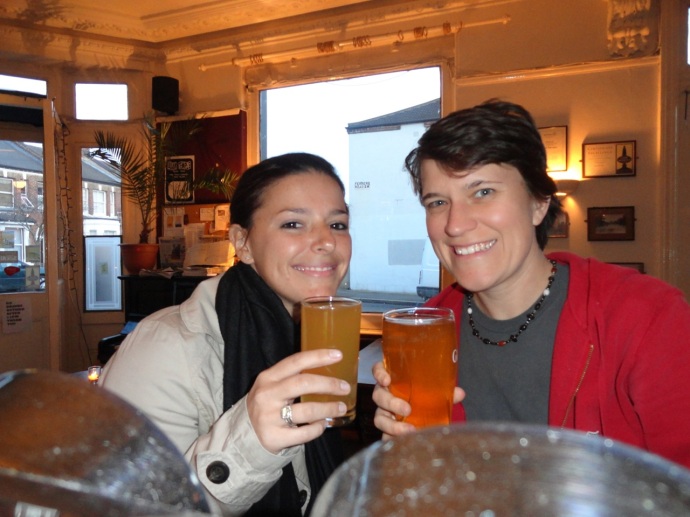 Below are a series of photos of the avenue of Horse Chestnuts in Tooting Bec Common.  You may remember Tooting Bec Common as the first part of my London Parks and Gardens series.  I will take more pictures as the year goes on, but I wanted to share what I had so far. Horse Chestnuts here in the UK have gone in decline as many of them have contracted Horse Chestnut Blight, which causes the leaves to brown very very early in the year (amongst other things). Many horse chestnuts have been removed because of this. It’s sad as the horse chestnut is a beautiful tree, with a beautiful spring flower and a bit of a stalwart of the British landscape. Recently they’ve been replacing the horse chestnuts with a different varieties, but I don’t think they are as nice. Any ways, onto the pictures…. 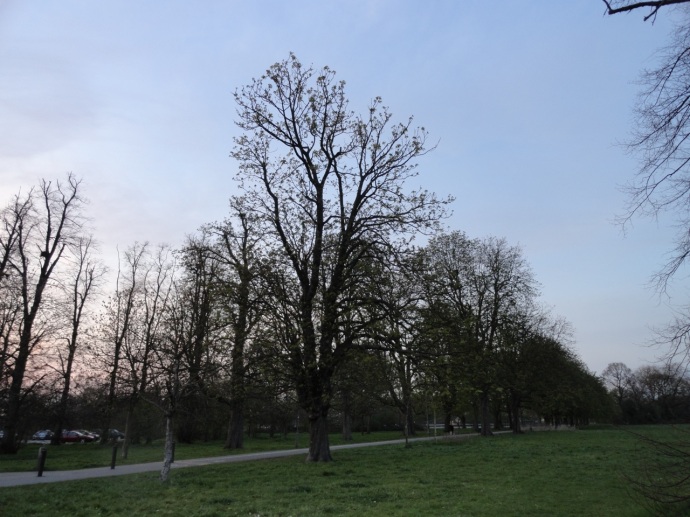 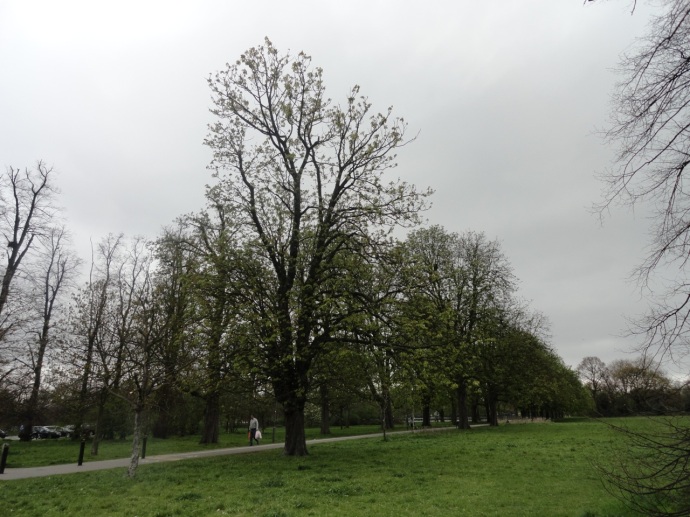