Clothes out enjoying the sun. Much better than having them on my radiators.

Another lovely Sunday morning here in SW London. My laundry is done and out on the line drying away in the semi-warm February Sun. Neighbor cats are running around our backyard. I’ve already had 3 cups of tea, de-molded our bathroom (it was super serious) and my traditional Sunday breakfast of cheesy garlic potatoes is on the stove. Ahh life is pretty alright. Even when I’ve got lots on my plate and about to have even more with my job ending next month.

I haven’t done any real blogging lately as my life has been mostly working, cycling and basically trying to catch a breath on the weekends by hiding indoors. This is does not lead to exciting blog posts.

But I have just remembered that I have not blogged about that trip to Bend OR in the beginning of the month. The trip was to show up for Tera and Ben’s going away party in Bend as they were moving to the UK. I needed one more big party in Bend with the kids, so I booked a flight a few weeks before and showed up a couple nights before the party. Both were equally surprised to see me. And the trip gave me an opportunity to catch up with some of my favorite friends in the world. Some valley people (Jill, Lisa, Emmy) were able to come over for the weekend as well, which was awesome. It was literally a whirlwind. It was 5 full days of eating and drinking myself into a stupor and I loved every minute of it. I never fully got on Oregon time and struggled for several days after my return to get back to London. I didn’t have a chance to catch up with everyone I hoped to, but the good news is that I should be back in Oregon in August for a tree conference. I will spend a week or two there and I can see everyone again and all those I missed. 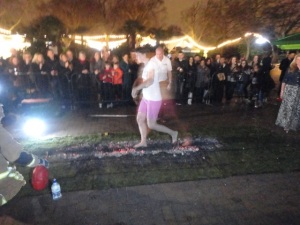 Walking on fire. With my palsy hand.

I know some of you are waiting on a report of my fire walk at London Zoo on Friday. So I totes did it. No big deal of course. My co-worker and I did it together. It was nice to have someone else there going through it. We had an hour training session before the walk which was mostly about overcoming fear. I wasn’t nervous to do it when I signed up and I wasn’t nervous going into it. I did get a pinch of nervousness when I walked up to the coals and was about to walk across them. But before hand we decided to think of it as walking across hot sand at the beach trying to get to the beach bar. Putting it in that perspective made it even easier.  All total, it was 4 steps. I wouldn’t have wanted to walk much further, but I imagine 6 steps would have been my limit at this point. It was cool and great that I raised so much money. I think so far I’ve raised £227, which is more than my goal, so that’s pretty awesome. Thanks to everyone who has donated and there’s still time to donate to the tigers if you want to. Just click here to donate online.

Me, Kelly and a tiger.

I’ll try to update again soon when my brain can slow down a bit from my work schedule. It’d be ok if I didn’t have work, then two extra projects going and a stack of tree books I want to read. It’s like I never left school. I’m not complaining. I would prefer to have it this way than being back to raking pine needles, wondering what the hell I’m doing with my life.  And plus I live in one of the best cities in the world. And I get to bike a ton. My 100 miles/week cycling schedule has made me lose all the fat on my thighs and butt, which I didn’t notice sneaking up on me the last 5-10 years. Seriously, can’t remember the last time I’ve been this size. Maybe high school? Maybe never? It feels really good and I’m aiming to keep it off for as long as I can.

I’m rambling. I’ve got to get to working on my side project. Hope you’re all doing well.  Peace

On my way to work one morning

It’s nearly the middle of February and Colleen’s new years resolution No. 6 has not been been tested much. I am supposed to be visiting 20 new London parks or gardens and taking lovely pictures and sharing my thoughts on them, but I haven’t yet. But that’s all changing tonight as I bring you part 1 of my 20 part series: Better Know London’s Parks and Gardens (a small rip off of Stephen Colbert’s Better know a district) or BKLPAG for short. That’s easy to remember abbrev. Any ways, The first park up: Tooting Bec Common.

I first must admit that I’ve gone through this park many times. It part of my commute route into work since November. So it’s hardly new. But I never take pictures.  That is until a couple weeks ago when I fancied a bit of walk. The common contains a small woodland area which is dominated

by oaks. I’d randomly discovered it in the fall when I was walking home from Balham one night and the leaves were still on the trees. It felt really special and I was happy to discover such a place not too far from where I live.  Even in the middle of winter, it’s a wonderful place to walk through.

The park is a couple hundred acres and contains a bunch of football pitches, an athletics track and a pool. Recently they’ve installed a new adventure playground which is like a giant rope playground thing, which I’d be pretty excited about if I were a kid in the area.

As you’ll start to see, trees will most likely prominently feature in these posts for good reason: trees are

The adaptable and ever so strong, Quercus robur (English Oak)

neat. And with all the excellent oaks in Tooting Common, it’s worth a visit. The great thing about oaks are the cavities they can develop and have for literally hundreds of years and not severely hamper their ability to grow. One of the oaks along Bedford Hill has one of the largest cavities I’ve ever seen on an oak. I’m pretty sure I could have taken up residence inside of it and been quite comfortable.

While I was there snapping photos I spotted some birds in a tree which didn’t seem like they quite fit in. I know that there’s a population of bird species here in London, which are most likely birds who have escaped or been let loose by their owners. Now they’ve successfully bred and taken to the sky of London. They aren’t the only species to take over here in England either. In the UK the red squirrel used to be the dominant squirrel species. That was until some aristocrat went across the pond and discovered North American gray squirrels which they brought back here for novelty. Well these squirrels are much more aggressive and destructive than their red counterparts. They ended up competing the reds out of most of England. Now the red ones are only found in isolated forests of Britain which is sad.

Even though I don’t think the gray squirrels should be here, I made a friend at the common the day I

went photo shooting. Poking out of a cavity in an oak above my head was a squirrel just staring at me. For a second I thought it was fake, but after about 25 seconds he disappeared back into the tree. Some of you may know that I have a soft spot for squirrels.

So I’ll leave you with a few more pictures from around the Common. If you live in SW16, I hope you go for a wander through there. I look forward to seeing the leaves getting back on the trees soon in another month or two.

BKLPAG Part 2 will feature something a little less sprawling, but no less impressive. So look forward to that in the coming days. 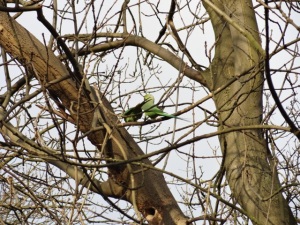 I bet this old tree provides a habitat to a surprising number of creatures.

Tooting Bec Common is part of the Capital Ring Walk

Where have I been? Lots of places. A few updates will be coming this weekend with many pictures and other fantastic Colleen content.