A good one.  I think I have some work to do.

Posted on January 23, 2011 by ldnphile
Categories: Uncategorized | Leave a comment

Why I will never be an astronaut 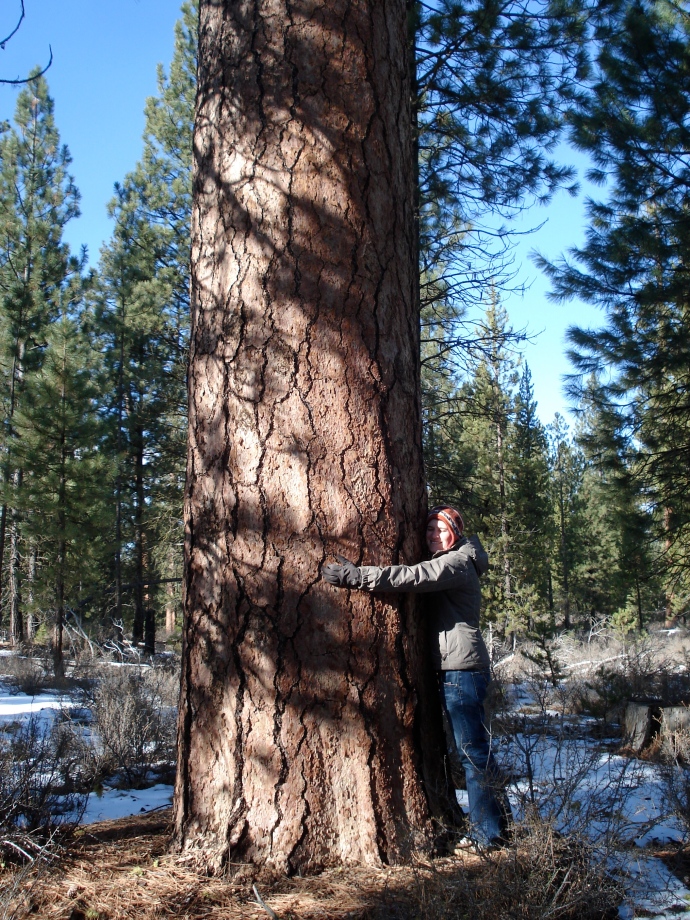 I like trees.  Actually, I love trees.  They have been a constant theme in my life.  Their influence being strong enough to make me move to another continent live in a city I would have never considered and study their role in our lives.  An odd thought.  As much as I have appreciated their role in shaping my life path it wasn’t until recently when I grasped how strong my connection to them was.

I had to spend a night in the hospital not too long ago. (Don’t worry about it.)   After some time in the main A & E, I was moved to another room and another bed situated next to a window.   I looked out into a courtyard, lit up with the light pouring out of the multiple floors of the building.  It was the wee hours of the mourning.   And I could hear what sounded like wind rushing through the branches of trees.  But from where I lay, there were no trees visible.  My man nurse Dominic was standing there asking me various medical questions, which I was forced to interrupt with my own question.  “That noise I hear.  Is it a wave machine or is it the sound of wind outside?”  Dominic, probably thinking I was worse off than I was, responded that it was probably just the sound of wind rushing into the ventilation.  “Oh, ok.  Just checking.”  I lay there unconvinced.  I tried to get some sleep.  It was a restless night.

The hours ticked by, I would wake up regularly, looking out the window to see if anything had changed.  Nothing had changed.  It was frustrating.  I was hoping for some sign of something, but I didn’t know what.  The building remained the same upon every glance.  After an hour of tossing and turning it suddenly dawned on me what I desired.  I wanted to see a tree.  I needed to see a tree.  The sound of wind (or wave machine) was unnerving me.  It needed explanation and a tree could do that. 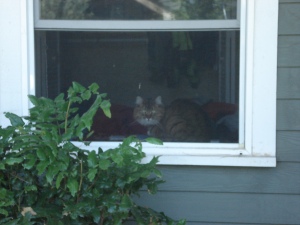 There was a running joke in our house in Oregon that Bella, the dog and Piccadilly, the cat, were neighborhood watch.  Both of them often had their heads perched to look out the front windows.  Gazing out on all that was happening on the streets.  But just as much as they were looking out, I was looking out the window as well.  It was a whole house of neighborhood watchers.  More than looking for bad people, I think I was looking out to see the state of nature. Was it rainy, foggy, sunny, snowy?  Are there clouds rolling in from the West?  I can help myself. It is difficult to go a couple minutes without looking out a nearby window.
So as I lay there in a hospital bed, with the sky beginning to get some light in it, I know what I wanted.  I wanted to see a tree.  I wanted a connection with nature.  I needed to know that everything in nature was all right.  That even though I wasn’t in too hot of shape, that the rest of the world was ok.    My mind and spirit pined for connection with the earth.  It was weird to actualize this feeling into a thought.

It was depressing laying there knowing that I couldn’t do anything about it.  By this time it was obvious that there was a wave machine being playing, but it did not give any calming effects like it was supposed to.  I don’t know what Dominic was playing coy with me.

A couple hours later, they let me go.  I stepped out into the sunlight a bit dazed and confused, but doing all right.  There were some trees, which stood happily outside the entrance of the hospital, leafless, basking in the warm glow of the rare sunshine on a winter day.  I was happy to see them.  And equally happy to be taking a shower and changing clothes soon.

Although I probably have a heightened awareness of the importance of trees in our lives, I don’t think my experience was unique.  Wanting to connect with nature is an integral part to being human.  Whether we want to recognize it as that or not.  We are of the environment, not separate.  I always feel my best after a walk or bike ride in a forest.  Like I’ve re-centered myself.  Really, that’s probably not too far off from the truth.  It’s getting back to the rhythm of life.  Oh and also it has been proven that seeing trees while in hospital can have huge benefits for people.

So I think we need to be aware of the power of trees or just the environment in our life.   It can have healing powers beyond what we can comprehend, and you don’t need to be sick to benefit from it.  We can really benefit by bringing more nature into our lives.  Further more nature is something to be respected, protected and shared.  And not just those trees in England or the US.   Those here on Earth who live in places derelict of trees need our help.  They too should be able to reap the benefits of trees we take for granted here in the Western world.

So let me get back to my main point:  I could never be an astronaut.  How could I ever be away from trees for months and months?  Knowing that I could barely stand 8 hours away from trees in a moment of duress, I do believe I would fail at being an Astronaut.  I’d probably end up jumping ship.  That wouldn’t go over too well.  I need the connection to trees, if merely the sight of them through a window, to get me through the day.   Just like everyone one else does. 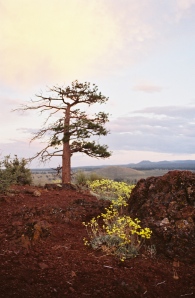 Those of you who want to help plant trees check out the following organizations:

Trees for the Future
Trees for Cities
Tree Aid

Too many other, more important things I need to focus on in the next 2 months than seeing if so and so is having a bad day or counting all the people whose  facebook status says “bear down!”  Yup.   This may or may not lead to more wordpress updates.  Guess you’ll have to check in to find out.

I’ll think about reconnecting fb before I get to Kenya.    Cheers.

Trust me.  I’m not mad about this status.  It’s everything I need right now in life.  It is glorious.

My favorite part of riding my bike home is when I get to Ashton Park.  Especially at night.  It’s peaceful and quiet.  All that I see is my flickering bike light on the path in front of me, guiding me home.  Mentally, I go to the happiest place I can imagine.  I think about how blessed I am to be in the place I am in life.  That my 10 year old self would think I’m a fucking badass for getting to live in England and ride a cool green Schwinn bike around.  It inevitably puts a goofy grin on my face.  I’m at my calmest.  I’m at peace.  All of that crumbles when I walk indoors and no longer privy to the forces of nature.  But not to worry.  With any luck, it will all happen again the next night.

Life is hard.  There are challenges everywhere.  You can either surrender to them or take them on.  I want to live in perpetual challenge.  If not, I’m not trying hard enough.  I’m not putting in the effort life deserves.  Every time I put in the most effort, I gain the most.  But it’s a difficult thing to find those challenges which are worthy of your effort.  If you put yourself out there.  I like to imagine myself on a little inner tube out at sea.  Floating about.  Being pulled by the currents of water at times, but also directing yourself a bit.  If you let yourself be a part of the energy of the universe, feeling the ebb and flow of it all, you’ll be guided in the right direction.  Look out for the little signs.  You’ll find the right challenges.  Or perhaps they’ll find you.  It’s not always going to be what you want or how you imagined things.  You just need to trust in the system.  It’s been around a lot longer than you and will be here a lot long after.

Passion Pit’s Sleepyhead is playing on my itunes.  It’s 2:30 AM.  I think that’s the universe telling me I should call it a night and get some sleep.  Peace and blessings y’all.

This won’t leave my head.  And honestly, I’m not that mad about it.  If Kenya is half as awesome as this video, I’ll have the best time ever.

That answers my question…..

So last night I was trying to get some travel insurance for while I am in Kenya as it seems like a good thing to do.  And I think I agreed to get some for my safety and ethics forms for my dissertation.
I came to a problem when they asked what my country of permanent residence was.  This was rather confusing as I am not sure where I stand being in the UK on a student visa.

Any ways, I emailed the company to ask whether I should put down that I live in the US or UK, as saying I live in the US is completely untrue.  The answer supplied made it rather easy to decide. (I hope you can read this:

Yeah, pretty sure I won’t be receiving long term health care in the US ANYTIME soon, despite Mr. Obama’s attempts.  UK it is.  Thanks for clearing that up travel insurance.

Yes, I know that story wasn’t that interesting, but it made me chuckle when I opened my Mail this m0rning.  Peace and blessings, y’all.

OK, in light of the recent theft of my speedometer on my bike, I may have to can my 1500 miles on my bike goal. Oh well. I will probably reach it as I only have to ride 5 miles a day on my bike for 10 months. Done and dusted.

As I walked around the grocery store this afternoon I realized I had forgotten a goal: Try eating oranges. I’m not drinking orange juice. I’ve been eating clementines and that’s gone alright so far. Also, try to eat mushrooms too. Now, I started working on this in the Fall, but it backfired when I went overboard and tried Cream of Mushroom soup. I had 3 spoons of it and it made me want to vomit. It’s going to be doubly hard now to not think about eating that soup when I have a mushroom. So oranges and mushrooms. Pretty big steps for me. We’ll see how it goes.

And I just want to mention this. Some of you may know that the thought of Hint of Lime Tostitos induces vomit in me.  I don’t even like looking at a bag of them at the grocery store.  It stems from a throwing up experience in Lakeland, Florida (where I did a lot of throwing up at my grandparent’s house).  Any ways, I overheard some girl in a restaurant last week mention how much she misses Hint of Lime Tostitos.  I about had to leave as I began to think about their taste as I ate my food.  No, they shouldn’t have those.  They are gross and unnatural tortilla chips.  I thought I escaped the wrath of the hint of lime chips over here, but I guess not.